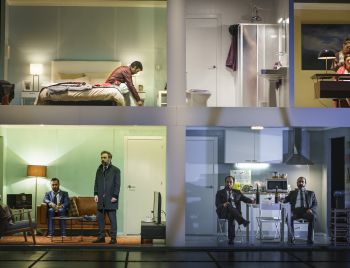 While the 7th Interferences International Theatre Festival is slowly approaching its last days, our online programming remains just as colorful and varied.

On Friday, November 27, at 12 noon, the Horizons section will feature the performance of Mother Courage and Her Children, directed by Armin Petras, co-produced by the Hungarian Theatre of Cluj and Staatsschauspiel Dresden.

“Mother Courage and Her Children is about the life of a single woman who goes through the Thirty Years' War of the 17th century as a victualler, alongside her children. The war provides her with a livelihood, but at the same time, it takes away all three of her children. Mother Courage does not change: she learns nothing, she does not regret anything. She can always move on. Brecht and Dessau's play is a great tragicomic ballad about the meaninglessness of life, and the joy of life that will not disappear, not even in the most difficult of times. Because you have to keep on singing, dancing, and loving even when everything around you collapses. Nevertheless, the uninterrupted momentum of moving on also means that everything will remain just as it was.” – noted director Armin Petras about the production.

The performance will be available until November 27, at 8 pm.

Also on Friday, at 12 noon on the festival's Facebook page (www.facebook.com/Interferences.Festival) will take place the album launch entitled The Tragedy of Man, edited by András Visky and published by Koinónia Publishing House, focusing on Silviu Purcărete's staging in Timişoara.

Also on Friday, November 27 from 2 pm, on the Interferences Facebook page in the OFF programme the multimedia installation ESCAPIST.fbx will be presented in Romanian, several versions of which will be available until November 30 in English, Hungarian, and Romanian on the festival's Facebook page.

On the same day, at 5 pm, the UTE30 section will feature an Alfred Jarry production of UBUs, by the São João National Theatre.

The performance is directed by Ricardo Pais, who stated the following about Ubu: „Ubu is pure irrationality. It personifies the typical terror of the Puppet Theater. One of the things that is usually unsettling about the Theater forms stabilized in highly codified representation traditions (we can think of the commedia dell'arte, the Japanese puppets...) is the feeling that those characters are inescapable: those who are bad will remain bad until the end, whoever is good like this will continue. Nothing and nobody changes throughout the work. We could say that we are facing the total unpretentiousness of the Theater as something of a regenerator. (...) [O]ne of the possible ways to bring this Ubu to the scene was to make this representation a representation at the fair. The imagery he develops finds evident echoes in the popular fair (more or less rural), in the open-air puppet theater. Ubu is a seedbed, which has far surpassed its original pretensions. He even took care of the author: Alfred Jarry ended up signing himself as Ubu!”

The performance is available for 24 hours.

From 7 pm, audiences can watch a musical production, The Soldier’s Tale, co-produced by the Young Famous Orchestra and the ENTER Theatre and Film Association. The performance was directed by Camelia Hâncu, and orchestra’s conductor is Vladimir Agachi. The performance will be available for 24 hours on the festival’s Facebook page, as part of the OFF programme.

The Horizons section will feature Castro, directed by Nuno Cardoso, at 8 pm, also performed by the company of Porto’s São João National Theatre.

The etymology of the Castro surname is related to a castle, a fortified construction. Nuno Cardoso invites us to inhabit the confined, claustrophobic territory of a house-country in his staging of Castro (1598), a play by poet António Ferreira. After its March premiere at Teatro Aveirense, this production's national tour was interrupted by the lockdown that, curiously, sent us all to our homes. Castro confronts us with the concrete intimacy of characters that come across as captives of themselves. Like in Danton's Death, the issue of utopia and its dark reverse is exposed here: love/desire and power as addiction and chaos, as a blindness that 'tarnishes / The brilliant rays of the ancient glory'. And how that tarnishing impairs the powers of decision and replicates itself, tainting with blood and revenge the family's fabric, via a dislocation of Castro's focal point from Inês to Pedro's mirror-like relationship with his father, King Afonso IV. 'What has this star been, so fatal?'

The performance is available until November 28, at 12 noon.

All performances are available free of charge at http://www.interferences-huntheater.ro, while the OFF section will be broadcast on the festival’s Facebook page (www.facebook.com/Interferences.Festival).

The festival was organized with the support of the Ministry of Culture, the Government of Hungary, the Bethlen Gábor Fund, and the Cluj-Napoca Mayor's Office and City Council.

The organizers reserve the right to make changes to the programme!