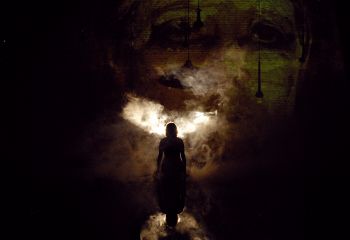 It foremost invites the audience to see and to listen, to fathom the weaving of a visual installation and a vocal work in absolute bareness, in a movement combining opening with an extreme concentration. Ismene, as a memory’s gardener, cultivates in loneliness the sensory contact with the elements of her childhood. From her attachment to the tiniest values, contrasting with the absolutism of her sister Antigone and the grandiloquence or the aloofness expected at the palace of her father Oedipus, springs a thought, a speech, a vision she builds with slowness and serenity. That movement, made by a woman at the end of her life, carrying her stock of experiences, of violence, transmuted in a long meditation both perceptive and lyric, makes Ismene a universal character, unique and really endearing at the same time. For her, a space which is the subtle embodiment of the mental universe, innermost recesses of memory, fantasies, shadows and dazzling intensity. A square space, a basin of water as the only playground, water wherein Ismene constantly bathes, recalling the garden fountains, the deserted palace, the place where she prepares herself to die. A solo voice being a sound, being a sense, contained in a dilated body, going far beyond her own skin. A tremendous mirror of the soul. 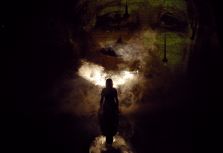 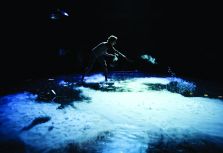 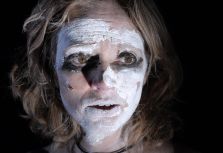 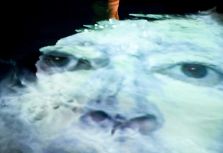