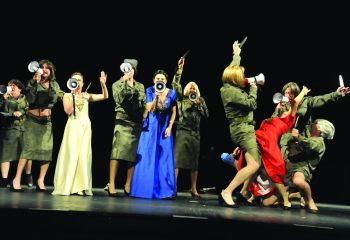 The lyrics of songs used within the performance by Jovan Sterija Popović, Đura Jakšić, Jovan Hadžić and Stevan Vladislav Kaćanski

We are thankful for the contribution of designer Arpad Blaško.

It is 1848, a time when the revolution spreads quickly from France, through Italy and Hungary to Vršac, a small town in Banat, where a group of local upstarts and bankrupt shopkeepers pose as Serbian representatives. Their only qualification for fulfilling the role of representatives is their patriotism, meaning whatever their personal interests might be. Initially, they maintain the façade of being humble “Hungarian patriots” (they are proud of their Hungarianized names, with their church masses being held in Hungarian – albeit not the proper Hungarian language; they adorn themselves with Hungarian rosettes, etc.), however, when they learn about the Serbian uprising and the demand for the creation of Serbian Vojvodina, they immediately turn into warmongers. Nonetheless, their patriotism is always ambiguous, depending on the outcome of the current battle. When the Hungarians win a battle, they display their Hungarian rosettes on their chest, but when the Serbs win, they, as local government representatives, brutally raid, imprison and kill their Hungarian neighbors. Whilst always singing patriotic songs, they stop at nothing in achieving their goals, killing the only honest and reasonable man of the group – Mr. Gavrilović, a prominent merchant. After the Hungarian counter-offensive of 1849, they flee to Belgrade, where they live as wealthy people and lament, without any remorse, over their ‘misfortune’ while at the same time singing Sterija’s gentle love ballad about the importance of ‘having a pure heart’.