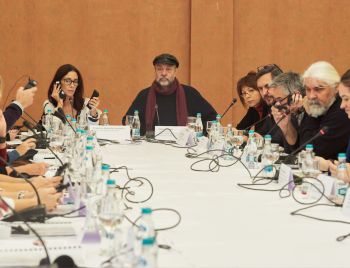 For the first time in its history, the November 2018 General Assembly of the Union des Théâtres de l’Europe (UTE) was held in Cluj, within the 6th edition of the Interferences International Theatre Festival. Gábor Tompa, the director of the Hungarian Theatre of Cluj, was elected in May 2018 to head the international theatre organization, comprised of 30 member theatres, the General Assembly held last weekend being the first such event of his mandate.

The event was attended by the heads of the Union's member theatres, such as the Vienna Volkstheater, Teatro di Roma, Schauspiel Köln, Comédie de Reims, the Greek National Theatre of Athens, the Yugoslav Drama Theatre, Teatro Nacional Sao Joao from Portugal, MDP – Prague City Theatres, the Piccolo Teatro di Milano, the Bulandra Theatre of Bucharest, the Comedy Theatre of Budapest (Vígszínház), the Maly Theatre and the Stanislavsky Electrotheatre of Moscow, the Bulgarian Theatre Laboratory Sfumato, as well as set designer Csaba Antal and George Banu, the Union’s individual members. This year’s Interferences Festival features five productions put forth by the Union’s member theatres, alongside the works of individual members Ilan Ronen and Csaba Antal, as well as a conference held by George Banu on the theatrical representation of the war.

President Gábor Tompa stated that there is a possibility that the UTE member theatres’ festival of 2019 could be organized in Cluj – during the year when Romania will hold the Presidency of the EU Council, a proposal supported also by the mayor of Cluj, the Honorable Emil Boc.

At the General Assembly, participants also discussed the Union's most important plans for the near future. A decision concerning the organization’s executive director position will be soon taken, as the new candidate is scheduled to take on the role starting with 2019. The main objective of the Union remains to create international projects that will foster not only the exchange of experiences between artists and countries, but also to introduce the younger generation to the world of theatre.

The Union's Digital Natives project, which is funded by the European Commission's Creative Europe Programme, has also begun, the Hungarian Theatre of Cluj being a partner in the project. The first thematic conference on the subject of digitization took place within the Interferences Festival - the Digital Hermits event included a roundtable discussion on the differences between digital natives and digital immigrants.