THE CRISES OF THE CONTEMPORARY WORLD AT THE 2018 INTERFERENCES FESTIVAL 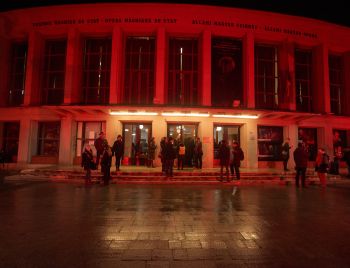 The 6th edition of the Interferences International Theatre Festival began with a solemn opening ceremony and Iphigenia at Aulis | Occident Express, a production of the Viennese Volkstheater.

In his opening statements, festival director Gábor Tompa said that, alongside some of the most influential creators of contemporary theatre, the following nine days will also showcase in Cluj the works of young, emerging directors and companies. The director dedicated the festival to the memory of Eimuntas Nekrošius, the great Lithuanian director who passed away a few days ago, whose last performance, Sons of a Bitch, performed by the Klaipėda Drama Theatre, will be featured in the festival’s program.

Directed by Anna Badora, the opening performance of the festival is an experiment in the parallel interpretation of an ancient tragedy and the current refugee crisis of the 21st century. The production examines if it is possible to use theatrical means to tell the story of a dreadful journey without it becoming a part of refugee folklore.

The Studio Hall also housed a contemporary interpretation of an ancient tale on the first day of the festival, namely the production of Ismène, the story of Oedipus’ daughter, staged by the Belgian Compagnie Khroma.

On Friday, the second day of the festival, audiences will be able to view the performance of Compassion. The History of the Machine Gun, presented by the Berlin Schaubühne and directed by Milo Rau. The central theme of the production is also the refugee crisis. It deliberately ventures into a contradictory terrain: how do we endure the misery of others and why do we watch it? Why does one dead person at the gates of Europe outweigh a thousand dead people in the Congolese civil war zones? It not only contemplates the limits of our compassion but also the limits of European humanism.

Friday evening, the Studio Hall will serve as a venue for the music of Kurt Weill and the expressionist melodies of the Weimar culture in a stunning interpretation by Sanda Weigl, accompanied by Mat Maneri on viola and Lucian Ban at the piano.

In addition to the theatrical performances, several additional programs are already taking place during our festival: Botond Részegh’s exhibition The Anatomy of War opens for the public on Friday at noon, at the Tranzit House, which will also house Digital Hermits, a conference addressing the challenges of a digital lifestyle, held on Saturday, at 10 am. In the meanwhile, audiences can meet the creators of the guest performances every morning at TIFF House, by attending our daily encounters.