William Shakespeare: THE MERCHANT OF VENICE 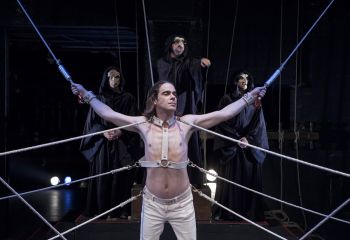 Bassanio, a young Venetian, tries to win the hand of Portia, a beautiful, wealthy heiress from Belmont. He turns to his best friend, Antonio, the merchant of Venice, and asks him for a loan of 3,000 ducats. Since Antonio's wealth is invested in his fleet, currently at sea, he's forced to borrow the money from Shylock, a Jewish moneylender whom he despises. Shylock grants him the money, but makes him sign a contract stipulating that if Antonio doesn't pay back the loan on time, he will have to settle the debt with a pound of his flesh.

Meanwhile, in Belmont, following her father's will, Portia puts to the test a string of suitors trying to win her hand by choosing the right chest out of three presented to them. After the Prince of Morocco and the Prince of Aragon both fail the test, Bassanio arrives, chooses the right chest and wins Portia's coveted hand in marriage.

During that time, in Venice, Jessica, Shylock's daughter, elopes with her lover, Lorenzo the Christian, taking with her all her father's money.

When Shylock hears that Antonio's ships and wealth have sunk at sea, he announces that he will sue Antonio for the pound of flesh owed to him by law.

The rumor of the suit reaches Bassanio and he quickly makes his way to Venice, to stand by his friend during the trial.

Portia and her maid arrive in the Venetian courthouse disguised as men. Portia, pretending to be a scholarly lawyer, pleads Antonio's case, finds a loophole in the contract and frees Antonio from Shylock's grip. Shylock is sentenced to hand his entire fortune to Lorenzo and to convert to Christianity. The play ends in Belmont with the union of all the young lovers. 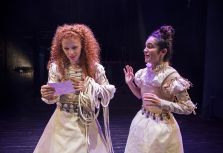 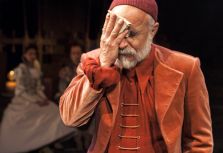 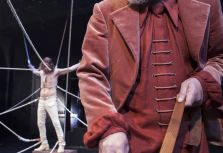