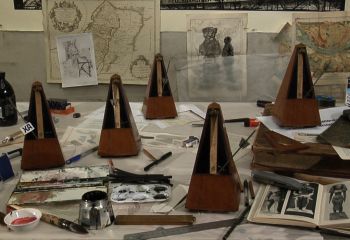 A ciné concert by Philip Miller and William Kentridge

An evening of short-film screenings by William Kentridge with live music by Philip Miller.

This is the latest project in an ongoing collaboration between the Johannesburg-born visual artist William Kentridge and his South African compatriot Philip Miller. Their artistic partnership dates back to Kentridge's 1993 film Felix in Exile, part of his celebrated Soho Eckstein series for which Miller wrote the score.

Paper Music is a live performance of three new films, arranged for piano and voice from multimedia installation, The Refusal of Time, first presented at Documenta 13. The cine concert features Philip Miller, Vincenzo Pasquariello and Joanna Dudley from the original cast of Refuse the Hour, who created an extraordinary sound world for these films.