NONA CIOBANU: Who Shuts the Night 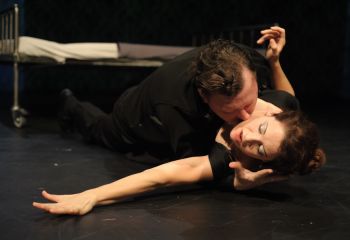 A former Nazi officer and a woman who was imprisoned in a concentration camp meet again, by accident, in Vienna, 13 years after the war. Their relationship began in the camp with a rape.

Max and Hanna, the two protagonists of the play, are the prisoners of their dark past and of history. They cannot make, or maybe they don't want to make a single step behind the walls of this prison. They need to revive the past again and again, in order to purify, to understand and to punish the other one - and themselves, too. While they accept to see the world with the eyes of the other, a dynamic relationship appears between them: both of them are playing, tirelessly, interchangeable roles all the time, whether it is the part of the victim or that of the oppressor.

I think that the question of the relationship between oppressor and victim is particularly topical: it can develop also in the family, or in society in a larger sense. We are just as responsible today for how we perceive these abuses, and for contributing to their support.