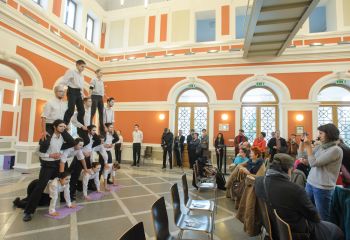 The Interferences International Theatre Festival opens on Wednesday, November 26. The press conference preceding the Festival began unconventionally with a flashmob of first and second year students from the Theatre and Film Department of Babes-Bolyai University. The flashmob, based on the Festival's motto, "stories of the body", was created by the students with the direction of actress Enikő Györgyjakab.

Gábor Tompa, director of and selector for the Festival, said that during the Festival's past three editions the attempt had been made to interpret the notion of interferences from different perspectives. Now, the richest and, at the same time, most relevant theme of contemporary theatre has been reached: the body. The human body is our primary (and unavoidable) means of expression, both in the theatre and in our everyday lives. The most important theatrical efforts of our time, where borders between theatre and performance art merge, try to reinterpret the notion of the body and offer viewers new experiences, said the director. Performances invited to the Festival show the diversity of the theme, with the program including performances of different genres, from the psychological theatre to the physical theatre.

Anna Horváth, vice-mayor of Cluj-Napoca, thanked the theatre for inviting important performances of contemporary theatre to the region, saying that they enriched the local audience with true experiences. She emphasized that the city is in a lucky position because it needs "only" to support the many exceptional events of local cultural institutions and civil organizations.

Gábor Tompa expressed his thanks for the support of the Festival's partners and sponsors and revealed that the theme chosen for the 2016 Interferences Festival is "foreignness".

The main financial support for INTERFERENCES 2014 is provided by the Ministry of Culture, the Mayor's Office and the City Council of Cluj. The chief sponsor is MOL Romania. The event is also supported by the Union of the Theatres of Europe, the Romanian Cultural Institute, UNITER, the Bethlen Gábor Fund, Energobit and OTP Bank Romania. Other partners include the Department of Interethnic Relations, OTP Bank Hungary, TIFF House, the Paintbrush Factory, Tranzit House, the Fine Arts Museum, International Art Gallery Angels, Casino City Cultural Centre, the Hungarian Theatre Institute of the Theatre and Television Department of Babes-Bolyai University, IATC - International Association of Theatre Critics, the British Council, Goethe Zentrum | Deutsches Kulturzentrum Klausenburg, Institut Français Cluj, Toyota, and the Avram Iancu International Airport of Cluj.