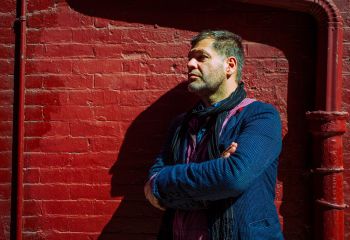 Lucian Ban’s mesmerizing new recording of solo piano improvisations, Ways of Disappearing, recorded in his native Transylvania in the stunning Baroque Hall in Timisoara, in May 2021, in the midst of a world standing still, represents a daring addition to the genre and is a powerful and uncompromising statement for his first unaccompanied solo album. Co-produced with long time collaborator, violist Mat Maneri, and released by Sunnyside Records, the album presents 14 pieces and improvisations’ including Lucian’s chilling takes on two modern jazz standards, by Annette Peacock and Carla Bley, respectively.

Ways of Disappearing is quickly met with rave reviews and critical acclaim in The Wall Street Journal, Downbeat Magazine, New York City Jazz Record, and has spawned tours in the United States and Europe.

In discussing his piano solo album Ban says “there’s no real difference between improvisation and composition” and if “structure (i.e. the tradition) can be learned, freedom is more of an instinct” the improvising musician has to pose musical questions and, especially when improvising solo, answer them in the act of the performance. His study of the jazz tradition has made Ban particularly devoted to radical pianists who approach the piano in unique stylistic ways: “I have always felt closer to a line of jazz pianists that I see as radical, people like Ellington, Monk, Paul Bley, Keith Jarrett, Andrew Hill and a few others who challenged the ways piano can be played both in a group or solo setting … for me they pushed the language beyond its defined borders”. After decades of gestation, Ways of Disappearing presents itself as a significant contribution to the art of solo jazz piano and shows just how inspired Ban can be in the moment, making music from ether, and, as Downbeat says in describing his music, “making personal art that feels universal”.