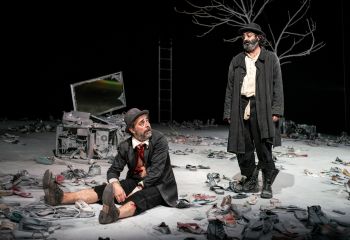 Tickets
2h 20’ with intermission
In Portugese with Hungarian, Romanian and English subtitles.
Age recommendation: 14+
based the translation of Francisco Luís Parreira

It’s about friendship, it’s about family. It’s an interesting thing: in Waiting for Godot there aren’t female characters, and it’s on purpose, it’s not by chance. He’s putting these characters in the light of the last creatures in the world, and where there’s no woman there’s no hope to recreate humanity. As nature created us, male and female, these are the premises of recreating the human species. Others can choose whatever they want, in an activist way, but that will not assure the future of humanity. Vladimir, in a way, he keeps the place of a wife, of a sister and a mom: he’s taking over these roles in the way he behaves, the way he takes care, the way he thinks and plans these so-called survival games. They are survival games and it’s a lot of fun. I believe that Waiting for Godot is not a dark play. It’s a play that says that there are no easy solutions, that it’s hard, it’s really hard, but there is always something there. If we don’t believe in that, if we only believe that that’s it, we will die, if there is nothing behind or after that, then life is absurd. That’s why I say it’s the last play about salvation because it puts the main question of Christianity. If there’s no resurrection, in that case life is absurd. That’s what they try to find together. There are lots of moments of crisis, deep crisis, deepening towards the end of the play, but at the end of the day there is a lot of fun and they stay together. Love is important, of course, but in a sort of ranking of sorts I would put friendship, because even in a family it’s important. Love isn’t eternal – it’s eternal over time but not in the lifetime of a single person –, it’s rare that love burns with the same intensity from beginning to end, but real friendship cannot die. Even in a family, if you have friendship as well, it’s easier. And with children, it’s not only the relationship of father and child, and obedience and respect, respect is important but if you can get into friendship with your children, that’s always an important key. 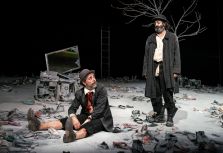 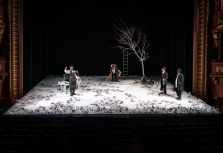 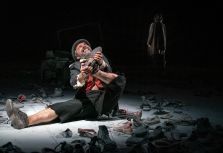 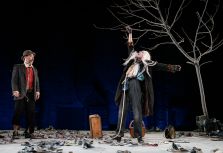 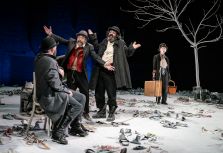