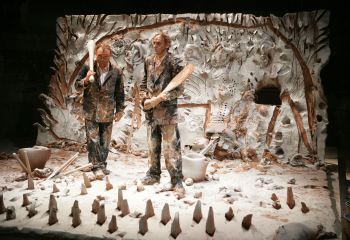 The impulse for this film lies in creating together: to produce a work that both contains qualities common to two creators and combines features specific to each one's language. In other words, to open up a territory of dialogue, a "ground" on which each can rely while venturing into the other's universe. And since reconnecting with the origins of art, through and in their artistic gesture, is an issue that drives both Josef Nadj's and Miquel Barceló's approach, it is around this intention that they have decided to articulate the film.

"Understanding dance above all as a site for encounter" –  this is how Josef Nadj defines his work. Beyond his role as choreographer the man is in fact an artist without borders and without barriers. Dancer, but also visual artist and photographer, his vision of humanity is poetic and passionate. Constantly in search of new forms. Ceaselessly willing to explore humanity as close as possible to human truth. Across his career, from Canard pékinois (1987) to Mnémosyne (2018), Josef Nadj has relentlessly pursued exigent and passionate choreography where gravity and compassion take turns, where depth and humour alternate. Whether he is visiting atypical authors (Beckett, Kafka, Michaux) or bringing painting along on stage with him (in performance with Miquel Barceló), Josef Nadj flourishes in complete corporal freedom. Oscillating between reality and fantasy, tradition and modernity, he explores the essential: man's relationship with himself. Because for Nadj, dance is fundamentally a humanist act. Over the years, the works of Josef Nadj have become references in contemporary dance. Beyond his national influence (Associated Artist at the 2006 Avignon Festival that officially designated him as "creator without borders"; Carte Blanche at the Grande Halle de La Villette in Paris in 2014), his work is recognized and celebrated around the globe. Enthusiastically received in nearly 50 countries, more than 400,000 audience members across five continents have appreciated his works in the most important international venues. Drawing his inspiration from the depths of the great myths of humanity, passionately intertwining both artistic disciplines and cultural references, Josef Nadj is elaborating a universal language. From 1995 to 2016, Josef Nadj has been director of the Centre Chorégraphique National d'Orléans. Since 2017, he established his new company Atelier 3+1 in Paris. 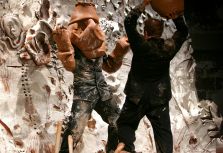 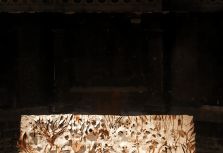