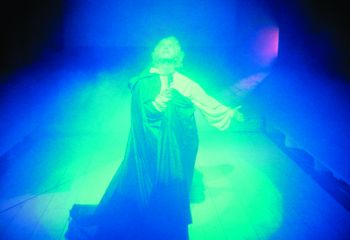 Directed for television by Carlo Battistoni
Italian translation by:Giorgio Strehler
The Romanian subtitles were realized based on Lucian Blaga's translation with the support of the Humanitas Publishing House.

God gives Mephistopheles permission to tempt Faust, to distract him from his hunger for knowledge. In the meantime, having evoked the Earth Spirit, Faust tries to kill himself, but is pulled back from the brink of death by the sound of the Easter bells and the joy of the crowd. Followed as always by his apprentice Wagner, he encounters the demon, first in the guise of a poodle and then as a gentleman, and they form a pact: in exchange for just an instant of happiness in this life, he will be his slave in the Afterlife. Abandoning himself to pleasure, Faust drinks the elixir of youth and dreams of the eternal feminine but falls in love with the young and pure Marguerite (Gretchen). Mephistopheles uses every possible means to help Faust to seduce her, even poisoning her mother. In prison, the crazed Marguerite drowns the child born of her relationship with Faust and abandons herself to death.
In the second part, Faust continues his journey with Mephistopheles, arriving at the Imperial Palace, which is full of mythical figures such as Helen of Troy, with whom Faust falls hopelessly in love. Mephistopheles then transports him to ancient Greece, where – accompanied by characters from the classics – he once again finds Helen and lives a passionate story of love with her. Faust later leaves her and sets off for the north. Profoundly saddened by the loss of his loved one, he decides that the only hope for happiness lies in action. He creates gigantic projects to benefit humanity, helps the Emperor to render a vast stretch of sterile sand fertile, and then dies, old and blind. However, his soul is saved, as his constant search for perfection has earned him a place in Heaven.

We see Giorgio Strehler among his students in the Piccolo Teatro Studio in Milan, and on stage, during the public rehearsals of Faust in 1988. He presents his pedagogical process using his unique metaphorical language, and he talks about Faust, which is an extraordinary moment in his long career: one where it became necessary for him to be on stage, alongside his actors.

"Through the highest levels of artistry, Goethe's Faust assails man, overwhelming him, gets to the roots of human adventure, reaching its heights and its most profound depths. The value of perpetuity, of presence beyond individual time, becomes clearer and more striking. Faust goes beyond Goethe, his era, his time, even beyond his writing and style. It is complete theatre. A form of theatre so vast, so fantastical and yet so coherent, reaching the very limits of the possible, that it demands both courage and humility, parsimony and patience, of the mind and heart, impossible to achieve as a whole, always and in every moment."

Affectionately called "The Maestro" by his European audiences, Giorgio Strehler was one of the most celebrated directors of the 20th century. Born in Trieste in 1921, Strehler graduated from the Filodrammatici Drama School in Milan. He interrupted his career to join the Resistance movement during World War II and, after being exiled to Switzerland, began staging plays in French, making the theater his home. Strehler returned to Milan after the war and founded Piccolo Teatro, Italy's first public theater, in 1947 with Paolo Grassi and Nina Vinchi. During his 50 years as artistic director of Piccolo Teatro, Strehler developed a theater that was formally rigorous, politically committed, and open to as broad an audience as possible. Over the course of his career, he directed some 200 plays and operas in Milan, Rome, Paris, and Salzburg. In addition to Arlecchino, Servant of Two Masters, seminal productions include Chekhov's The Cherry Orchard, Shakespeare's King Lear and The Tempest, Goldoni's Il campiello, Pirandello's Mountain Giants, Goethe's Faust, and Brecht's The Threepenny Opera and The Good Person of Szechwan. Strehler's opera credits include Verdi's Falstaff, Simon Boccanegra, and Macbeth, as well as Mozart's Don Juan, Le nozze di Figaro, The Magic Flute, and Cosí fan tutte. In 1990, with the French Minister of Culture Jack Lang, he founded in Paris l'Union des Théâtres de l'Europe. He was also a member of the European Parliament and senator of the Italian Republic. Strehler died in 1997.