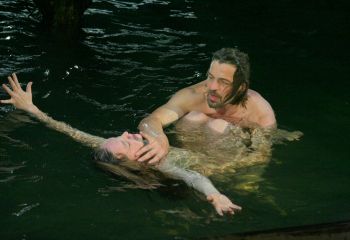 Adapted for the stage and directed by: LEV DODIN
Set design: Alexey Porai-Koshits

Filmed for television by the Russian State TV channel Culture.

"A Play with no Name reflects life. Life is also a play with no name, so to speak. Especially our life today. Someday it will be defined and labelled, but for the moment it is 'titleless'. Life. Until death, which as Chekhov wrote, is an event that determines nothing and changes nothing. Even the death of the hero is unable to change anything. Especially since, as it turns out, there is no hero. There is no strength, only 'weakness, weakness and more weakness'. "Being Platonov hurts" in all of us, except those who feel no pain. At least for now. That means that this is their time. But the story is not about those people, although they make history today, those people who pay bribes and set people against one another, blackmail and buy out. They act. They are the actors. That's how they see it, in any case - for now. But our story, I repeat, is not about them, but about others who suffer even more from 'being Platonov', meaning from desire, hope, the last futile search for the humorous, cheap and defamed ideal. 'Platonov. My life.' The play is unfinished. Chekhov was either writing a novel in dialogue or jotting down impressions of his time and just couldn't stop. Because the impressions never ceased and could never be systematised. There is yet another play in the drafts, and we borrow from these drafts. We also hear and play our play with no name as modern music about life going on before our eyes, the life we all suffer from. This illness has no name. We have no way of telling what will become of it and how it will end. We can only say with certainty that we really want to live."

Born in 1944 in Novokuzneck (Siberia), Lev Dodin, who has at different times studied under ex-students of Konstantin Stanislavskiy and Vsevolod Mayerhold, graduated from the Leningrad Theatre Institute in 1969. Had worked as a guest director in many theaters and quickly became a promising talent of his generation. From 1975 on, worked at the Leningrad Maly Drama Theatre (known as Maly Drama Theater – Theatre of Europe today). He became artistic director of the institution in 1983. He has directed productions destined to become famous around the world: Brothers and Sisters, Gaudeamus, Claustrophobia, Chevengur, Uncle Vanya, The Demons, Platonov, King Lear, Life and Fate etc. – and has received numerous professional awards: The Golden Mask, the Lawrence Olivier Award, the Europe Theatre Prize, the Russian State Prize and many others. 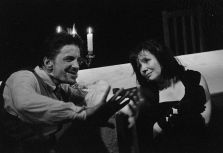 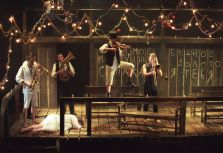 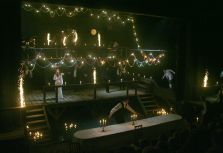 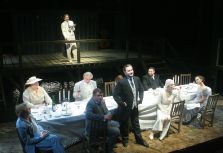