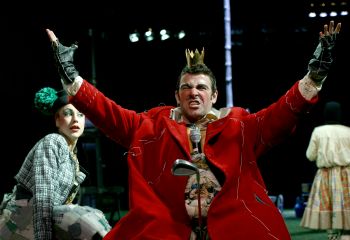 UBUs is born from the four Alfred Jarry's Ubu plays, with which he opened new avenues for modern theater, and was made a dramaturgy that aims to highlight the parodic, chaotic, gargantuesque and resembling essence of amoral hormone from the first Ubu. If the whole Ubu is about all power, especially the small power, of the continuum, of the teacher, of the woman over the man, but also of the king over the subjects and vice versa, of the man over the man and of greed over all of them. UBUs is a fun-revisiting of Jarry's universe, building from it a kind of musical act of disruptive varieties, questioning the truths made: of Theater, of power and its abuses. Féerie mounted in the dirty environment of a very popular fair, the show will be what we can create from the illusion of absolute freedom with which we apologize for so many tyrannies.

„Ubu is pure irrationality. It personifies the typical terror of the Puppet Theater. One of the things that is usually unsettling about the Theater forms stabilized in highly codified representation traditions (we can think of the commedia dell'arte, the Japanese puppets...) is the feeling that those characters are inescapable: those who are bad will remain bad until the end, whoever is good like this will continue. Nothing and nobody changes throughout the work. We could say that we are facing the total unpretentiousness of the Theater as something of a regenerator. (...) [O]ne of the possible ways to bring this Ubu to the scene was to make this representation a representation at the fair. The imagery he develops finds evident echoes in the popular fair (more or less rural), in the open-air puppet theater. Ubu is a seedbed, which has far surpassed its original pretensions. He even took care of the author: Alfred Jarry ended up signing himself as Ubu!"

Ricardo Pais was born in 1945. Director's Course University Degree, Drama Center London. He was a professor at Film School Lisbon; project coordinator Area Urbana – Action Nucleus Cultural of Viseu; Theater Director Nacional D. Maria II and commissioner general for Coimbra – Theater Capital. He was Director of TNSJ. In this condition, he directed the PoNTI Festival in editions of 1997, 1999 and 2004, the latter having welcomed the XIII Festival of the Union of Theaters in Europe. He was also a member of the Board of Directors of this European theatrical network founded by Giorgio Strehler. From his stage director are more than fifty theatrical performances and scenic creations, in which freely crossed literature, singing, electronics, dancing, the radio theater, the video projections, magic and performance art. He directed Portuguese authors like Fernando Pessoa, Padre António Vieira, Almeida Garrett, António Ferreira and Gil Vicente. Staged also nuclear authors of universal dramaturgy, from Machiavelli to Alfred Jarry, from Shakespeare to Wedekind, from Molière to Ionesco. However, he prefers to define himself as "Music director": quote as examples Raízes Rurais e Paixões Urbanas, one melodic portrait of Portugal commissioned by Cité de la Musique, dir. musical Mario Laginha; the opera The Turn of the Screw, Benjamin Britten (2001); and Cabelo Branco é Saudade (2005). Sombras was his last premiered show by TNSJ, synthesis of several practices, but also from an artistic creation path started in 1972. 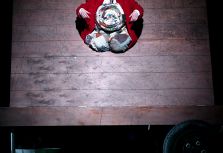 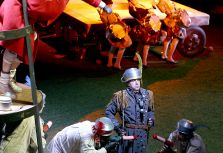 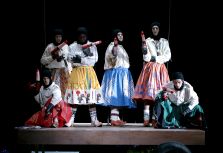 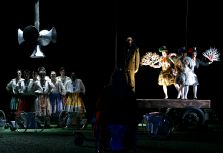