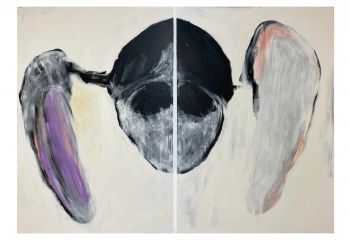 Angels do exist, as in heaven, so on earth. Here is the latest evidence. Botond Részegh’s angels are not, however, inhabitants of the mythically overcolored sky, but rather powerful forces that are in tension with each other or which even merge into each other, part of and participating in our created world.

According to the Bible, angels are supernatural beings created like us, but unlike us, they are eternal, indestructible, and supernatural. They have personality, intelligence, the ability to speak, emotions, will, and consciousness. Something is disturbing in this. Perhaps it is that we know ourselves too easily. But angels, meanwhile, are spiritual beings invisible to humans, able to appear in the flesh and participate in earthly events, which only adds to the unsettling nature of their existence. The Bible records numerous events where angels came out of hiding and revealed themselves to humans in some form. We even learn how this happens: an angel can reveal himself in all his spiritual glory and power. Or, he can empty himself of this and appear as a human being in a quite deceptive way. And if that were not enough, an angel can also turn into wind or fire.

Some people can see angels. They see them. They notice them. They sense their existence, their nearness, and their presence. I don’t think it depends on whether one’s eyes are open.

Angels, at least in the ordinary version, are rarely noticed. Although who knows as there are no statistics on that. Angels resist statistics. But what can be said with certainty is that some people do see them. And among them are those who can draw these supernatural, spiritual beings. As if they were walking among us. Could they be us without wings? These lines do not enclose a form, angel or human, but open up the infinite. These beautiful torsos, the aesthetics of everyday life and bodies pressed together, infinite lines entangling and separating, when all that remains is desire: the desire for desire, the body’s longing for the body, for the embrace, to be in each other’s palms for a while, to enjoy the illusion of safety, and to taste a little of the angelic world. Because, when we look at these images, we feel again and again that we are both at home and strangers in this unfathomable world, locked in each other’s bodies. The closeness makes our faces dissolve in each other, and in the process, the angel wings fall upon us with a soft noise, and their movement fills the air with joy. Why should all angels be terrible if they are us.

We float freely in space without objects, and sometimes a few drops of eternity splash upon us. For in their sleep we too may long for sin, and then part. We become angels, leave earth and step onto our planet.

Never has desire been so hesitantly endless.

Botond Részegh (b. 1977) lives and works in Miercurea Ciuc and is represented by the Yi Gallery in New York. Since 2011, he is the art director of Új Kriterion/New Criterion Gallery (Miercurea Ciuc). He received a scholarship from HAA (Hungarian Academy of Arts) in 2018. Botond Részegh made his debut in 2001 with the exhibition of his diploma works at the University of Arts in Bucharest. This was followed by numerous personal exhibitions, of which we mention: Drawings from a Distant Axis (The National Museum of Art of Romania, 2021), Anatomy of War (Mogosoaia Palace, 2019), Loss of Soul (Museum of Art Timișoara, 2018; Atelier 030202, Bucharest, 2017; Museum of Art Arad, 2016), Nightfall (Romanian Culture Institute, Vienna, 2015 and Tranzit House Cluj Napoca, 2014) VOLTANY, Volta Show (New York, 2014) and Northeastern University (Boston, SUA, 2010). In 2018 he participated, together with Csaba Pléh, in a panel talk at TEDx Danubia.