A coproduction of the Gyula Castle Theatre and the Illyés Gyula National Theatre in Berehove. (Hungary −Ukraine) 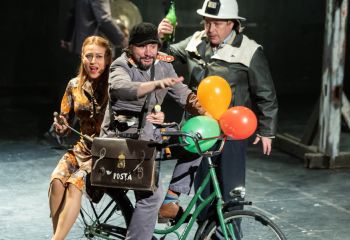 Tickets
2h 30’  with intermission
In Hungarian with Romanian and English subtitles.
Age recommendation: 12+
The Berehovo company expresses its gratitude to Zsuzsanna Radnóti, Angela Örkény and Antal Örkény, who, in light of the war in Ukraine, waive their royalties, thus supporting the work of the theatre.

The tragicomedy of the vulnerable

In the midst of the raging war, a visitor arrives to the Toth family, who are living in the idyllic Mátraszentanna. This visitor is the commander of their son fighting in the Russian front. The major’s nerves were severely damaged during the months he fought on the battlefield, so he would like to spend two weeks at the house of the Toth family. But not to be idle until then, he forces the family to box and wrap up several objects. And the Toth family is wrapping things up around the clock to please the guest. They hope that this will win the goodwill of the major, so that their boy on the front will also be treated in a better way. The family continues to box things with dwindling enthusiasm, eventually killing the major, not even suspecting that their victim and the murder itself are completely in vain – and absurd. They did not know that the postman of the village had not delivered the letters announcing any bad news, not even the one in which the news of the death of their son was written.

“On January 13, 1943, the rock, with which the Sisyphean fate of the Hungarian army was completed, began to roll down the Don bend. A friend of mine, Tibor Cseres, who experienced the same thing, once explained that it is impossible for a Hungarian writer to describe this war. I could not put up with that thought. Sixty thousand people froze there, in that bombardment, in the icy wind, in the snow. The fact that I am alive is only a small fraction of probability. Maybe that is why their winter, their destiny has not let me find peace ever since. The The Toth Family is not about them, or not only about them, in fact, it may be about something else, but I have always thought of them as I was writing this story. Most of them froze while sitting, and as they sat there, with their faces frozen in marble, I can still feel their eyes on my back” – Örkény writes in the preface of The Toth Family.

This idea is also the starting point of the performance in Berehove. At the same time, this makes Attila Vidnyánszky’s production special, which is not about a former war or about any war in general, but it specifically evokes the Second World War – in the spirit of Örkény. That is what makes the story authentic, according to the director, who draws the arc of insanity all the way to the present: after the marching songs from the war, Communist marching songs start to play, and then a signal from the American series Dallas suggests that the devastation still continues over the decades. Only the tools and the methods change.

Today’s problems are largely the same as they were when The Toth Family was written. Örkény investigates basic issues. Human nature does not change, and the system of relations that the play outlines is absolutely transferable to the present. This is the property of the great works, the classics. 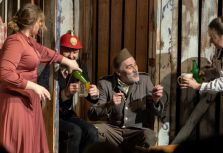 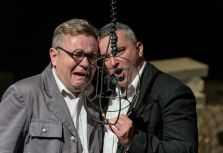 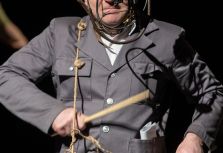 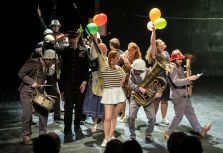 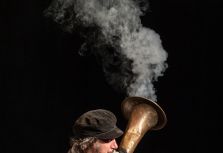