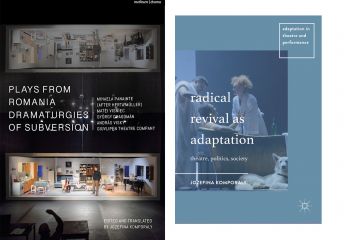 This book examines the radical reinterpretation of precursor texts and prompts as an innovative form of adaptation for the stage. In this context, stage adaptations are defined as active and risk-taking interventions on pre-existing sources, dramatic and otherwise, that can range from single-authored plays to collaborative creations and devising projects. Radical adaptations have the potential to constitute a cutting edge pathway of exploration in performance, by virtue of operating at the intersection between experimental practice and multiple creative transpositions and crossovers among genres and media. They offer a viable platform for the negotiation of topical concerns embedded into global cultural, socio-political and historical shifts, thus

Plays from Romania: Dramaturgies of Subversion

Translated and edited by Jozefina Komporaly

This volume, edited and translated by Jozefina Komporaly, is the result of a preoccupation with focusing attention to Romanian drama and theatre in the English-speaking world and brings together recent translations of contemporary plays. Apart from authors writing in Romanian (such as Matei Visniec), the anthology includes the work of creatives reflecting the experience of ethnic minorities living in Romania, such as the German (Mihaela Panainte’s adaptation of Lowlands by Herta Müller), Hungarian (György Dragomán’s The Passport) and Roma community (Giuvlipen’s Sexodrom).
As an academic teaching Theatre and Performance Studies at the University of the Arts London and as a practising translator, Komporaly endeavours to build bridges between the literary world and the theatre profession, and the texts included are the result of collaborations with British or US-based theatre companies. Some of the plays have in fact had their world premiere in English translation, such as Teresa by András Visky, which was staged by Foreign Affairs theatre company in London under the title ‘The Unburied’ in a successful production supported by the Arts Council of England and the Romanian Cultural Institute in London. The volume also brings together two major supporters of Romanian theatre in the UK and US: Faynia Williams of Brighton Theatre and Melissa Lorraine of Theatre Y Chicago, who have written the foreword and afterword to the volume.

Jozefina Komporaly’s recent edited collection of plays from Romania continues her deterritorializing of theatre within Anglo-American theatre scholarship. Additionally it is really helpful to see both the current book and her broader efforts through the framework of deterritorializing dramaturgies, following Eckersall et al.’s definition of the term: specifically making and seeing expanding connections between the theatre and social world and between the individual, the local, and the global. Plays from Romania is underpinned by and benefits from such an approach, and in this sense its subtitle ‘dramaturgies of subversion’ is an excellent and layered choice.