THE 8TH EDITION OF INTERFERENCES BEGINS ON THURSDAY! 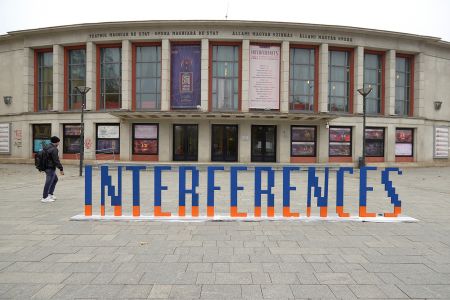 The official opening of the 8th edition of the Interferences International Theatre Festival, organised by the Hungarian Theatre of Cluj, will take place on Thursday, November 17, at 6 pm in the Upstairs Foyer of the theatre. The 11-day festival will feature 14 companies from 11 countries around the world.

Speaking at the press conference preceding the event, festival director Gábor Tompa said that the subtitle of this year's eighth edition of the Interferences International Theatre Festival is FEAR / HOPE, which refers to the fear that has been aroused by the recent pandemic and war situation. He said that theatre has an even greater responsibility in these times: it must passionately seek the truth and uncover the facts, the mysterious causes and interests behind events, and use its own means to shed light on the complex relationships that drive tragic phenomena. But, more importantly, it must offer hope to the audience, a glimmer of light at the end of the tunnel. To remind us of the encouraging Christian saying, "Fear not!".

The opening performance of the festival is a production of Hamlet by the Hungarian Theatre of Cluj directed by Gábor Tompa. This production was also chosen because the world-famous tragedy by William Shakespeare has always played a prominent role in the history of the Cluj theatre, which celebrates its 230th anniversary this year.

The programme will be enriched this year as well by additional events: daily talks with invited artists at the TIFF House, exhibition openings, book launches, film screenings and concerts.

A detailed programme of performances can be found on the festival website at www.interferences-huntheater.ro.

The festival is co-organised by the Corvineum Foundation, with the support of the Ministry of Culture, the Government of Hungary and the Bethlen Gábor Fund, as well as the Cluj-Napoca City Hall and City Council. The event is supported by the European Theatre Union, the Romanian Cultural Institute, the Office for Interethnic Relations, Energobit, the Communitas Foundation and the Cluj County Council. Its main partners are TIFF House, Transit House, Romanian Opera of Cluj, UNITER. Mobility partner: RMB Inter Auto.

Interferences 2022 ticket sale for the Main Stage performances of the Hungarian Theatre of Cluj!

The ticket offer is only valid for tickets purchased at the theatre's ticket office.

Tickets for the performances featured in the festival are available online at www.biletmaster.ro and at the theatre's ticket office.

The theatre's ticket office will be open from 10 am to 10 pm daily during the festival, between November 17 and 27.

The theatre reserves the right to alter the programme!