ONLY THREE DAYS LEFT OF THE 8TH INTERFERENCES FESTIVAL 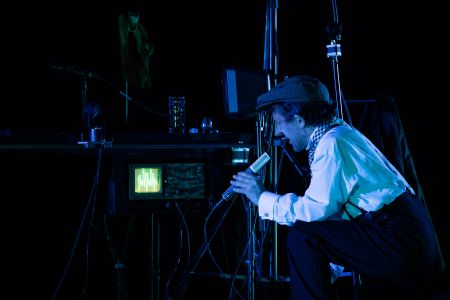 The 8th edition of the Interferences International Theatre Festival is nearing its end in Cluj-Napoca. Over the past eight days, in line with the festival's theme, audiences have been able to encounter possible theatrical representations of fear and hope through performances that seek to understand and interpret contemporary events through the medium of theatre. Continuing with this year's theme, the final days of the festival will feature works by directors such as Diana Mititelu, Stéphane Braunschweig, Gábor Tompa, Astrid Bas and Heiner Geobbels.

Following a discussion on Here Moscow Calling, on Friday, November 25, from 10:00, a book launch of Anita Rákóczy's Samuel Beckett's Endgame and Hungarian Opening Gambits will take place at 11:00 at TIFF House. Also at 12 noon, theatre critic Judit Simon will introduce the book Színháztól színházig [From Theatre to Theatre] - 36 interviews with Gábor Tompa.

Also on 25 November, two performances of Israeli author Edna Mazya's Games in the Backyard, directed by Diana Mititelu and performed by artists from the Constanța State Theatre, will take place in the theatre's Studio, from 5 pm and 10 pm, respectively. Diana Mititelu was awarded the Romanian Theatre Association (UNITER) Debut Prize in 2021 for her production.

"Games in the Backyard is a performance that children, parents and teachers need to see and then reflect on with a clear head. The play focuses on the relationships that bind adolescents together and the reasons why young people destroy their own lives under the pretext of an erotic-aggressive game (...) It is a painful lesson in precociousness, manipulation and responsibility." - writes critic Teodora Ghica about the performance.

From 7 pm, the Paris-based Odéon - Théâtre de l'Europe, which is making its debut at Interferences, will present Time for Joy in the theatre's Main Stage, staged by Stéphane Braunschweig, the theatre's artistic director.

"A new creation by Norwegian author Arne Lygre, directed by Stéphane Braunschweig, Time for Joy is a play about the possibility of happiness, in a small contemporary community. In short, a play of our times." – wrote Oriane Jeancourt Galignani about the production.

The creators of Games in the Backyard and Time for Joy will be attending the audience meeting at TIFF House on November 26, at 10 am.

On Saturday, November 26, from 1 pm, the 52-minute documentary film "If the Play Becomes Reality" about the life and work of György Harag will be screened in the theatre's Studio. Director-operator: István Dala; Producer: László Hollós; Writer, editor-reporter: Orsolya Huszár.

From 7 pm on the theatre's Main Stage, festival audiences can enjoy Gábor Tompa's co-production of Prometheus'22, a performance in four languages. The production, based on the tragedy of Prometheus Bound by Aeschylus, is a joint production of the Hungarian Theatre of Cluj, the Constanța State Theatre and SNT Drama Ljubljana.

“Prometheus'22 wants to be a meditation of the condition of the intellectual in the 21st century. In the digitalized and powerfully manipulated news network and social media truth became over-relativized and even fact-checks can end up being considered as fake news… The performance tries to approach to the myth of Prometheus from a more ironic perspective exploring its significance in the context of our contemporary world.” – reads the synopsis of the performance.

A discussion with the creators of the production will take place the next day, November 27, at 10 am at TIFF House.

On Saturday evening at 9 pm, jazz fans will be treated to another concert in the theatre's Studio, this time an a cappella jazz concert entitled Nica's Dream, performed by Jazzation from Budapest.

“Jazzation, the a capella vocal group proved to be a massive hit in Hungary’s most popular jazz venue, the Budapest Jazz Club. Three girls and two boys turned in a brilliant performance in front of a house packed to the rafters. Their radiant voices and their joie de vivre coupled with a minimalist but very effective choreography enhanced a most versatile fare.” – wrote Péter Pallai, programme organizer of the Budapest Jazz Club, about their earlier concert.

On Sunday, November 27, at 11 am, a discussion with the Parisian company Collectif A will take place at TIFF House, in an unusual pre-show event, as the production of Life? Or Theatre?, directed by Astrid Bas, will be performed twice on the last day of the festival, from 6 p.m. to 10 p.m. in the theatre's Studio.

Charlotte Salomon (1917-1943) was a German painter of Jewish origin. She fled Germany in 1939 and found refuge in the south of France, in Villefranche-sur-Mer. There, she created her masterpiece Life? Or Theatre? between 1940 and 1943, which she considered "her life's work". She died in deportation on October 10, 1943, at the age of 26. Through her art, she tried to ward off the fatalities of her own life and those of the horrors of war, in order to create "something truly crazy and singular". Life? Or Theatre? is Charlotte Salomon's most important work. A comprehensive work. A dazzling graphic novel, with more than 1,325 gouaches and watercolors, accompanied by musical references, where she depicts her life.

The final Main Stage performance of the 8th Interferences International Theatre Festival will take place on Sunday November 27 at 8 pm, when audiences will be able to watch the world-famous Heiner Goebbels' production of Freedom of Action.

“For this staged concert, Goebbels is collaborating with two pianists of the renowned Ensemble Modern. He is interlacing the sounds of prepared pianos with a contrasting and competing voice. Virtuoso actor David Bennent meanders through the poet’s explosive worlds of ideas, sketching images of a mysterious and inhospitable universe and shifting the power of agency and freedom of choice to the mere imagination. Through language, voice, music, and stage setting, Freedom of Action explores notions of autonomy and dependency.” - reads the synopsis of the performance.

The creators of Freedom of Action will meet with the public on November 27, after the performance, in the theatre's upstairs lobby.

The festival is co-organised by the Corvineum Foundation, with the support of the Ministry of Culture, the Government of Hungary and the Bethlen Gábor Fund, as well as the Cluj-Napoca City Hall and City Council. The event is supported by the European Theatre Union, the Romanian Cultural Institute, the Office for Interethnic Relations, Energobit, the Communitas Foundation and the Cluj County Council. Its main partners are TIFF House, Transit House, Romanian Opera of Cluj, UNITER. Mobility partner: RMB Inter Auto.

Tickets for the performances featured in the festival are available online at www.biletmaster.ro and at the theatre's ticket office.

The theatre's ticket office will be open from 10 am to 10 pm daily during the festival, between November 17 and 27.

The theatre reserves the right to alter the programme!