William Shakespeare: The merchant of Venice 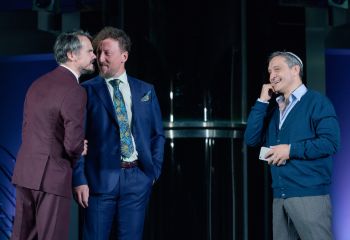 "The Merchant of Venice is a comedy about the blithely diffused struggle between Usury and Friendship, Revenge and Forgiveness, Disharmony and Harmony. (...) Fairy tale, dark comedy, moral parable or comedy dell'arte? The raw material gathered unconsciously within Shakespeare, only the stage master who intertwines the situations presented is conscious. But the craftsman is also a poet, and the enchanted raw material reflects the fullness of life, even when he does not want us to take it too seriously."

"The show takes place in the cold world of modern technology, where, in contrast, passions run high. Passions that point, first of all, toward narcissism and selfishness. At the same time, these characters are also prisoners of certain aspects of their own lives.
Nobody chooses to give up everything, or to say he or she is not interested in money. They all act according to their own interest, everything being manipulated by a complex network of interests and alliances. Of course, each character bears strong, sincere emotions; there is sex, love, eroticism. But the characters do not decide based on these. They only temporarily believe these things to be more important. Selfishness and self-interest interfere in all decisions reached. If we reflect on this idea, we can create a terribly cruel theatre. Of course, with elements of comedy, with comic situations, but essentially a greedy, cruel chase after 'immortality', survival or happiness."

Gábor Tompa graduated in stage and film directing from the I. L. Caragiale Theatre and Film Academy in Bucharest in 1981, having been the student of some outstanding, founders of the worldfamous Romanian school of stage directing, such as Liviu Ciulei, Mihai Dimiu, and Cătălina Buzoianu. Since 1981, Gábor Tompa has been directing at the Hungarian Theatre of Cluj, in 1990 he became the artistic director of the theatre and he undertook the management of the theatre as well.
He founded the Faculty of Dramatic Art in Cluj and has run its directing programme since 1991. He has been a guest lecturer at the Académie Théâtrale de l’Union, Limoges, Schauspielschule Freiburg, Brunel University, London, and Institut del Teatre Barcelona. He has staged more than 80 plays and produced another 80, directing in Romania and in countries worldwide, including France, Germany, Spain, the United Kingdom, Austria, Hungary, Ireland, Canada, Serbia, the Czech Republic, and South Korea. He has won the UNITER’s Best Director of the Year Award six times and received the UNITER’s award for Best Performance of the Year in 1989 for The Bus Station by Gao Xing Gian and in 2009, for Three Sisters. In 2002, he received the UNITER Award for Excellence for the many achievements of his career. His film, Chinese Defense, won the Best First Feature Award at the International Film Festival in Salerno, Italy in 1999 and was officially selected for the 1999 Berlin Festival.He is the author of several volumes of poetry and essays on theatre, such as: A hűtlen színház. Esszé a rendezésről[The Unfaithful Theatre. An Essay on Stage Direction], Bucharest, 1987; Óra, árnyékok [Clock, Shadows], poems, Bucharest, 1989; A késdöfés gyöngédsége [The Tenderness of Stabbing], studies, Cluj, 1995; Aki nem én [He Who Is Not I] poems, Mentor, Târgu Mureş, 1995; Készenlét [Alertness] poems, Héttorony, Budapest, 1990; Lidércbánya[Mine of Nightmares] poems, Pallas Akadémia, Miercurea-Ciuc, 2004, and Címke-függöny [Label-curtain – Gábor Tompa’s private theatre dictionary], Bookart, Csíkszereda, 2010.
From March 2006 to April 2008 (when the Hungarian Theatre of Cluj joined the UTE), he was an individual member of the European Theatre Union. Between 2007 and 2019, he has been Head of Directing at the Theatre and Dance Department of the University of California, San Diego. In May 2018, he was elected President of the European Theatre Union. 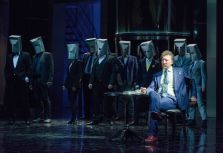 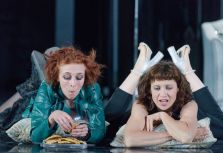 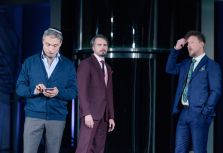 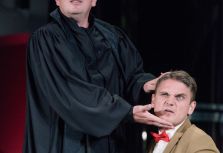 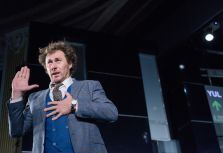 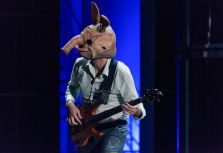 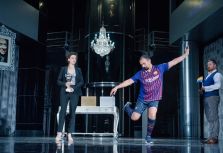 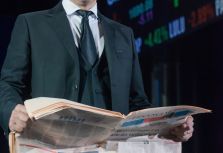 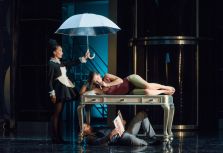 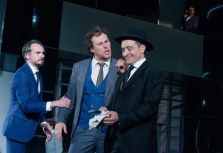