The Tragedy of Man − Book Launch 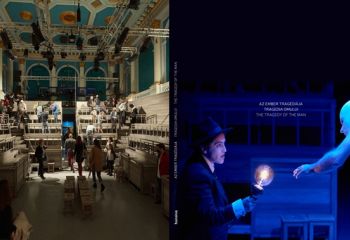 The Tragedy of Man

The book focuses on documenting the creation of a production in Timişoara, based on the dramatic poem - a sort of a classic Hungarian Faust - written by Imre Madách. In addition to András Visky's detailed rehearsal records, once can read Melinda Mátyus' exhaustive, elegant and sensual performance description, as well as a portrait essay by George Banu, the famously recognized interpreter of directors' creative universes. The book breaks with the tradition of publishing director's albums, as the editor's undisguised intention is that the volume could also be used advantageously by university students during their contemporary studies of theatre and literary history. This goal also guided him when compiling Silviu Purcărete's theatrical breviary by juxtaposing fragments from various interviews and statements of the artist, with the help of Demeter Kata. A special added value of this beautiful literary object created by Timotei Nădăşan is that Silviu Purcărete's legendary drawings and sketches created during the rehearsals are thus publicly released for the first time within the volume. The creation of book would not have been possible without the unconditional, always generous and attentive support of Attila Balázs, the director of the Csíky Gergely Hungarian Theatre of Timişoara.