MILO RAU: ORESTES IN MOSUL – THE MAKING OF 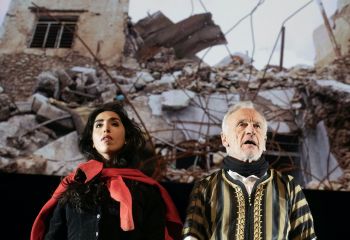 With Orestes in Mosul, Milo Rau made perhaps one of his most important works, acclaimed in the international press. Documentary maker Daniel Demoustier followed him on two preparatory trips to Mosul: this resulted in 'Orestes in Mosul: The Making Of'

Can a Greek tragedy help heal a scarred city? New York Times wondered, on the occasion of the rehearsals of Orestes in Mosul (March 2019). It's one of the questions that was fiercely debated in Mosul, just as some of the sensitive scenes in the play led to discussions between the Iraqi actors, the European and Milo Rau himself. The documentary also includes images of the performance itself, the rehearsal process in Mosul, interviews with actors and some local incidents.

TRAILER Orestes in Mosul docu from NTGent on Vimeo.