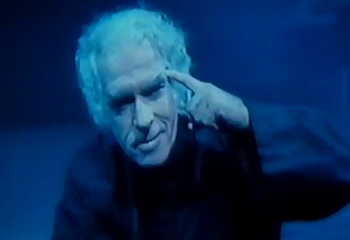 A film by MARCO MOTTA

We see Giorgio Strehler among his students in the Piccolo Teatro Studio in Milan, and on stage, during the public rehearsals of Faust in 1988. He presents his pedagogical process using his unique metaphorical language, and he talks about Faust, which is an extraordinary moment in his long career: one where it became necessary for him to be on stage, alongside his actors.
Giorgio Strehler
Affectionately called "The Maestro" by his European audiences, Giorgio Strehler was one of the most celebrated directors of the 20th century. Born in Trieste in 1921, Strehler graduated from the Filodrammatici Drama School in Milan. He interrupted his career to join the Resistance movement during World War II and, after being exiled to Switzerland, began staging plays in French, making the theater his home. Strehler returned to Milan after the war and founded Piccolo Teatro, Italy's first public theater, in 1947 with Paolo Grassi and Nina Vinchi. During his 50 years as artistic director of Piccolo Teatro, Strehler developed a theater that was formally rigorous, politically committed, and open to as broad an audience as possible. Over the course of his career, he directed some 200 plays and operas in Milan, Rome, Paris, and Salzburg. In addition to Arlecchino, Servant of Two Masters, seminal productions include Chekhov's The Cherry Orchard, Shakespeare's King Lear and The Tempest, Goldoni's Il campiello, Pirandello's Mountain Giants, Goethe's Faust, and Brecht's The Threepenny Opera and The Good Person of Szechwan. Strehler's opera credits include Verdi's Falstaff, Simon Boccanegra, and Macbeth, as well as Mozart's Don Juan, Le nozze di Figaro, The Magic Flute, and Cosí fan tutte. In 1990, with the French Minister of Culture Jack Lang, he founded in Paris l'Union des Théâtres de l'Europe. He was also a member of the European Parliament and senator of the Italian Republic. Strehler died in 1997.