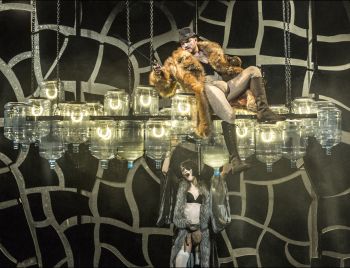 Over the next three days, those interested will be able to view performances from all three sections of the Interferences Festival. The Horizons section will feature two opera performances, the first is Ivan Acher's Sternenhoch, an opera sung in Esperanto, directed by Michal Dočekal, followed by the Hungarian Opera House of Cluj production of Ravel's one-act operas, L'Heure Espagnole / L'enfant et les sortilèges, directed by Gábor Tompa. The programme also includes international productions such as Milo Rau's documentary Orestes in Mosul - The Making Of.

Two plays by Shakespeare performed by the company of the Hungarian Theatre of Cluj will also be featured in this weekend's schedule: The Merchant of Venice, directed by Gábor Tompa, as well as Julius Caesar, staged by Silviu Purcărete, both included in the Horizons section. Another recent production of the Hungarian Theatre of Cluj is (In)visible, directed by Leta Popescu, which will be in the OFF program, available both on the Interferences International Theatre Festival's Facebook page and Vimeo channel.

The UTE30 section will feature outstanding performances from the Union of the Theatres of Europe, such as Alexandru Darie's staging of The Winter Tale; Endgame, directed by Krystian Lupa, and Gábor Tompa's direction of Leonce and Lena.

The performances are available free of charge at http://www.interferences-huntheater.ro!

The festival was organized with the support of the Ministry of Culture, the Government of Hungary, the Bethlen Gábor Fund, and the Cluj-Napoca Mayor's Office and City Council.

The organizers reserve the right to make changes to the programme!