German and Israeli performances on the opening day of the Festival 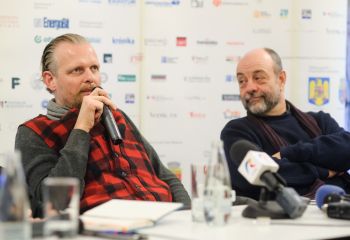 The fourth Interferences Festival, organized under the motto “stories of the body”, kicked off with a celebratory opening and two performances on Wednesday, November 26. As Gábor Tompa welcomed the audience in three languages, The Merchant of Venice, a performance by Habima Theatre, was already underway in the Studio. The Enemy of the People, a performance by Berlin's Schaubühne am Lehniner Platz and directed by Thomas Ostermeier, was presented in the Main Hall right after the opening ceremony. Contrary to practice, both performances were presented on Friday also.

Complementary auxilary events commenced promptly on the second day of the Festival. There were discussions with the creators of the two above mentioned performances, followed by the introduction of Robert Sturm, manager of Tanztheater Wuppertal, who talked about the four day projection-series, Hommage à Pina Bausch; those interested had the opportunity to watch Café Müller, a 1978 Pina Bausch production. The projection-series will continue with Orpheus and Eurydice on Friday, The Rite of Spring on Saturday, and Kontakthof on Monday.


Daily articles about the Festival's many events can be found at the Festival Journal from contributors Anikó Varga (writing in Hungarian), Claudiu Groza (Romanian) and Francesca Moschitta and Paola Faraca (English).